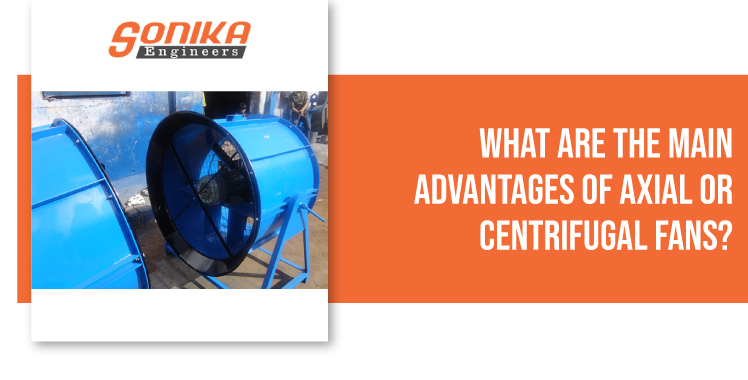 Many companies are Axial Fan Manufacturer in India, but what are they used for? The phrase "industrial fan" does not have a clear meaning in reference markets, and in this post, we'll try to fill in some of the blanks by explaining what they are and answering some often asked questions.
Axial fans and centrifugal fans are the only two fundamental categories of industrial fans. Centrifugal fans and axial fans are the two most common types of fans and blowers, but there are many additional types that come under a wide variety of names, such as Industrial Blowers, Industrial Ventilation Fans, Exhaust Blowers, Industrial Exhaust Fans, hvac fans and blowers, and many more.

The first known use of an axial fan was in the horizontally oriented windmills of medieval Europe. Axial fans were the first to use electricity to propel air in the 1880s.

Axial fans conduct airflow on a single axis. A fan works because its blades spin around an axis, drawing in the air parallel to the axis and expelling it in the opposite direction.

Axial flow fans manufacturers made it to generate a lot of airflow because of the high flow rate they generate. However, the air currents they generate are weak. The amount of electricity needed to run them is little.

It's safe to say that the vast majority of axial fans' applications are more broad in nature. Think about getting one any time you have a big air transfer to make.

Spaces, including houses and workplaces, benefit greatly from low-pressure, high-volume flow for cooling purposes. It also works well as a cooling mechanism for electronics like the PC you're using right now.

Condenser cooling in a refrigeration system makes use of an axial fan. It works wonderfully as a ventilation fan, too.

Axial fans have grown increasingly ubiquitous as technology has been integrated into more and more consumer goods. Modern vending machines employ them to keep the computers that process cashless payments at a safe temperature.

This design is probably what you need to solve airflow problems in non-ducted situations. Despite facing less resistance, axial fans are able to move large volumes of air.

Army engineer Lieutenant General Alexander Sablukov of the Russian Empire's Imperial Russian Army designed the centrifugal fan in 1832. Distinct from axial fans, centrifugal fans (also known as blowers) have a different design. A fan wheel consists of a number of blades attached to a central hub, and it is used to enhance the air pressure of an incoming airstream. When using a centrifugal fan, air is redirected such that it flows outward at an angle of 90 degrees with respect to the direction from which it entered.

When a centrifugal fan is needed to push air through a duct system, it is the best option.

As a result of the higher resistance to airflow created by ductwork, the pressure is raised when ducts are present. You'll need a high-pressure fan to combat this increased pressure. A centrifugal fan is what you'll want to use.

Because of this, air conditioners and dryers can benefit greatly from using centrifugal fans. They excel in corrosive and acidic conditions as well. Their exceptional durability makes them an excellent choice for use in pollution filtering systems.

These gadgets are sturdy and hard to break since they are completely sealed and able to filter out dust and other particles.

A centrifugal fan is fundamentally different from an axial fan in both construction and operation. As a result of these distinctions, different types of fans are better suited to certain tasks, and consumers aren't always sure which one to choose. Choose the right axial fan manufacturer in India when you buy it! Sonika Engineers are one of the best axial flow fans manufacturers and their products like, Axial Flow Fans, Centrifugal Fans are the top most sellers in Gujarat.

What is the difference between an exhaust fan and a ventilation fan?

How to find the Best Industrial Blower Manufacturers?

How to Select Right Industrial Fan for Industrial Ventilation Systems?